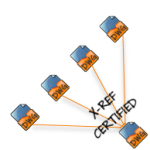 Worx Plugins V5 was released last week and VIEWWorx – one of our most popular plugins – is now compatible with BricsCAD.

Named views have been in AutoCAD for a long time but creation has been cumbersome and involves several steps. VIEWWorx takes it to the next level and allows the user to create dynamic named views based on drawing geometry in all 6 orthogonal directions by JUST SELECTING OBJECTS.

Select Objects in the Model to Create Named Views

With just a few quick steps we can select items in the model to create a ViewBox.  The ViewBox ties automatically to the Named Views in your drawing. Again, the ViewBox is linked to the Named Views.  Modify a ViewBox and it modifies the associated Named Views. Simple. As with all Worx Plugins, it does work with X-Ref’s.  Create your ViewBoxes in a Master Model with EASE.

What if the ViewBox and the associated Named View created are a little too small?  “I just need to see a bit more of the surrounding piping!”  VIEWWorx has that covered.  Stretching a ViewBox automatically updates the views associated with that ViewBox.  View creation has never been easier!

VIEWWorx also automatically updates the view clips to the new ViewBox dimensions.  No more annoying objects in front or behind your desired view.

Turning Views On/Off with a ViewBox