The Intergraph Process, Power & Marine support team has posted NON-ACAD_CADWorxPlant2016_OE.zip. This download contains the NavisWorks Object Enablers for CADWorx 2016. This update is now available for download from Intergraph’s Smart Support web site at https://smartsupport.intergraph.com/ on the Freeware Tools and Utilities page.

There are some interesting new features when using the CADWorx 2016 Specification Editor.

One of the first things to note is that when opening an existing catalog, you will be prompted to either Upgrade the catalog or to Save a backup and Upgrade. 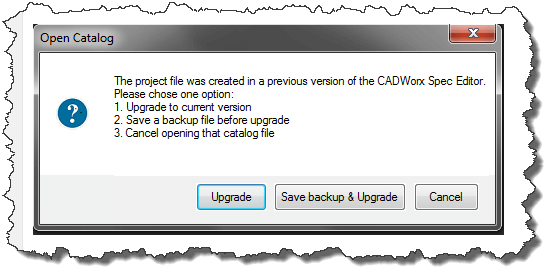 If you still have jobs using previous versions of the catalog (i.e. PRJ files linked to the catalog) it is highly recommended that you Save the backup and upgrade so that you can proceed with implementing CADWorx 2016 on upcoming jobs and Project (PRJ) files.

Once the catalog has been upgraded there is no path backwards, in other words there is no save as function to make it useable with older PRJ files.

When working with Project files (PRJ) you now have an option moving forward to Save As. This gives you the option of saving an existing PRJ, or newly created PRJ, to either the 2016 format (the default) or as either a 2015 or 2014 format project file.

Additionally, you now have the ability to assign various end types to components in your specs. This will no longer cause ProgramCode 0000 condition, preventing placement of these components. This enhancement now supports any combination needed.

A brief video covering this topic can be found here.